Discussion:
3D modeled "Kubrick Rooms"
(too old to reply)
kelpzoidzl
Permalink
In "Second Life" there is a new installation someone made that models
some important rooms in the Kubrick universe.

Everything here is made from scratch except the photo textures from
the films, mapped onto the created 3D models.

Whole scenes could be acted out, showing potential for Second Life as
a live medium. 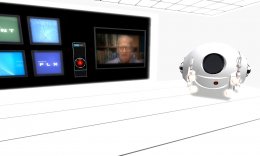 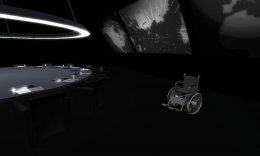 kelpzoidzl
Permalink
The "Kubrick Rooms" are back in Second Life. Very well done. There is also a Somerton in Second lufe.

Glad to see the Kubrick Rooms back after quire a few years.

Second Life is free to download fir PC just search Kubrick Rooms after you get in, choose an Avatar and learn the interface.

The images I had posted yrs back in this thread are long gone links.

s***@hotmail.com
Permalink
Post by kelpzoidzl
The images I had posted yrs back in this thread are long gone links.
The Kubrick Rooms in Second Life:

Kubrick and Wells in Second Life:

For the CE3K screening, they showed a trailer for Spielberg's, "Ready Player One," which takes place in a virtual world like Second Life; filled with 80s pop culture avatars and vehicles.

kelpzoidzl
Permalink
I didn't know they had a Wells room. I'll have to look at it tonight. Last time I searched SL for my old name it had nothing that nice.

Speakng of Wells Amazon Prime video has a new colorized version of Things to Come, which I watched a few nights ago. Very good job!

I had done some tinted excerpts on some of my youtube videos and always wanted to do a fully colorized version, but they beat me to it.

s***@hotmail.com
Permalink
Post by kelpzoidzl
Speakng of Wells Amazon Prime video has a new colorized version of Things to Come, which I watched a few nights ago. Very good job!
That's likely the master which Ray Harryhausen supervised for his colour restoration series; which included his own B&W films, and "She."

Criterion's B&W HD transfer is pretty good. Obviously some scratches which were too bad to completely erase, but the best restoration I've seen of, "Things to come."

s***@hotmail.com
Permalink
Post by kelpzoidzl
I had done some tinted excerpts on some of my youtube videos and always wanted to do a fully colorized version, but they beat me to it.
Check out the website of this archival photo colorizer from Brazil; one of the best:

kelpzoidzl
Permalink
It's funny, i watched the old classic "invaders from mars" the other night. I could have sworn it was in ***@w, but it was a color film. I had seen it as a kid on the "Million Dolar movie" in ***@won on TV, many times. It was almost better in ***@w--scarier.

s***@hotmail.com
Permalink
"Invaders from Mars" was shot in a process called SuperCinecolor, which used black and white stock; not unlike a Technicolor process. It's possible it was broadcast from a B&W dupe at some point due to the limited availability of the Cinecolor film master.

If you can find the DVD of "Invaders from Mars," grab it, as the rights-holder (Wade Williams) has since been holding back on the distribution license and film elements. The DVD is from Image Entertainment and has the US and UK endings.

Williams owns a catalogue of vintage Sci-Fi which fans are still trying to have restored and released in HD:

kelpzoidzl
Permalink
That explains it...We had color tv when it first came out, so I know it wasn't that we didn't haveva color set. It was defintately shown on ***@W. This was in the 50's when I watched Million Dollar Movies. It was on channel 9 in Long Island. "Million Dollar Movies" would show the same film every evening around 8 or 9 pm for seven days and then repeat. Often they were TV premieres. I think they had the TV premiere of Invaders from Mars and Godzilla and many others that pop in my mind from time to time. I usually would watch each film every night of that week so they were well imprinted in my brain.

The color in Invaders from Mars, had a curious look to it---sort of like technicolor-- but had a darker grain to it almost looking like a colorized film.

I am going to research it and see what the internet says about the history of Million Dollar Movies.

kelpzoidzl
Permalink
Here is blog link about Million Dollar Movies. There are also youtube video of the show opening, but the one video I saw was not the original opening.

kelpzoidzl
Permalink
I saw over and over all the old Frankenstein and Dracula films on "Zackerly" who had been on CBS then moved to channel nine. He was instrumental in letting all us kds see all the old Horror film classics. He would show three or so films, on the weekends till late a night. We can assume Kubrick watched him.

s***@hotmail.com
Permalink
The color in Invaders from Mars, had a curious look to it---sort of like technicolor--almost looking like a colorized film.
Cinecolor had both a 2-strip and 3-strip process ("Invaders from Mars" used the latter, dubbed SuperCinecolor). It was a budget Technicolor without patent infringements: printed in red, blue and yellow (not magenta, cyan and yellow). "Invaders from Mars" will always have that color-shifted look; blues appear more cyan while reds & greens look more vibrant.
but had a darker grain to it
The TV station could have had a telecine from a 16mm print.

kelpzoidzl
Permalink
I just ordered the hardcover of this William Cameron Menzies book:

kelpzoidzl
Permalink
Todays article in LA times about how directors today are "interchangable."

s***@hotmail.com
Permalink
Post by kelpzoidzl
Todays article in LA times about how directors today are "interchangable."
http://www.latimes.com/entertainment/movies/la-et-mn-directors-fired-from-franchises-20170913-story.html
In many ways, film is dead as *THE* boundary-pushing medium. The decade of CG superhero and fantasy movies certainly killed things all-around. I doubt today's artists believe for a minute that they could survive the action/sci-fi/fantasy/horror/animation factory; pumping-out blockbusters-per-month.

I remember when I first saw computer animation used for film in the late 80s, my feeling was that it would replace the craft end; where wizard auteurs like Lang, Menzies, Iwerks, Harryhausen, Pal and so-on were no longer needed and—more catastrophically—no longer felt they were needed. I was right.

The failed push for HFR was a last gasp at technically reinventing the cinematic form. Nolan smartly uses a 50-year old film format to make things have real scope again in comparison to the ongoing CG-fests. He's likely the last of his kind.

Also, long-form TV series have taken-over the dramatic end of cinema (e.g., David Lynch). Between SK and Hitchcock, the last of my cinematic icons are gone; I'll just say that.

Doorbell just rang and here is my Menzies hardcover book! I am going to LOVE this. Glad I didnt opt for the Kindle version. A substantial read. Sure it would be nicer if full color storyboards and doubled the 416 pages, but this is impressive at first glance. Too bad there is no Volume Two coffee table style.

Is it strange it gives me goosebumps just opening it?

kelpzoidzl
Permalink
This topic, reminds me of Wells, "Fate of Mankind" quote I've posted a few times over the years

"Art may have an Indian Summer."

"Now how did we--because I was one of a generation of science
students--how did we see the world in '88? (1888) Time had opened
out for us, and the creation, the Fall of Man and the Flood, those
simple fundamentals of the Judeo-Christian mythology, had
vanished. Forever. Instead I saw a limitless universe throughout the
stars and nebulae were scattering like dust, and I saw life ascending,
as it seemed, from nothingness towards the stars....... .......and it
seemed possible that man would go on to a power and wisdom beyond all
precedent........ ......The coming barbarism will differ from
the former barbarism by it's greater powers of terror,
urgency and destruction, and by it's greater rapidity of wastage.
What other difference can there be without a mental renascence? The
average life will be steadily diminishing, health will be
deteriorating. The viruses and pestilential germs will resume their
experiments in variation, and new blotches and infections will give
scope for pious resignation and turn men's hearts towards a better
world beyond the stars. There will be a last crop of saints and
devotees. (Art may have an Indian summer) Mankind which began in a
cave and behind a windbreak will end in the disease-soaked ruins of a
slum. What else can happen? What other turn can destiny
take?....... ........Either life is just beginning for him or it is
drawing very rapidly to it's close. This is no guess that is put
before you, no fantasy; it is a plain and reasoned assembling of
known facts in their natural order and relationship. It faces you.
Meet it or shirk it, this is the present outlook for mankind. "

kelpzoidzl
Permalink
I bought the Things to Come colorized version and it indeed is the one by Ray Harryhaysen with special features.